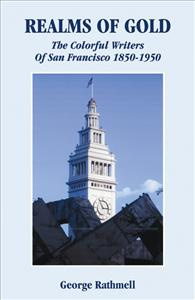 Realms of Gold: The Colorful Writers of San Francisco 1850-1950 review from reviewthebook.com.  Reviewed on 12/14/2011 by ReviewTheBook.com Member Jan Stone

Realms of Gold, The Colorful Writers of San Francisco, 1850-1950, has its own particular cachet, which author George Rathmell likens to San Francisco during this incredibly important literary period. This is a book for readers who love to immerse themselves in their chosen topic. If that happens to be the evolution of writers from 1850-1950 coming in and out of San Francisco, you’ve found gold, and it doesn’t disappoint as the Gold Rush around that time did for thousands we’re told about.

The decade produced an incredible group of writers, and the period is made all the more interesting, telling and meaningful as Rathmell presents it in context to the time. Darwin’s The Origins of the Species and Marx and Engels The Communist Manifesto had rattled the senses of self in Europe and was on its way to the United States, colliding with the incredible writers and experiences that came out of the “Bohemian Club.” Rathmell doesn’t even miss that title and its irony.

As definitive as their writings are the lives and acquaintances of Sam Clemens, Rudyard Kipling and so many others. The arc of Robert Louis Stevenson’s experiences are no less enthralling than his writing. Jack London’s rejection slip pile grew and who knows what would have happened and been written had he not met up with George Sterling. A walk through Chinatown into St. Mary’s church and through Quincy Alley unearths moments that allow readers to appreciate “The Bohemian Club” and the many writers more than is imaginable without these lives in context.

After reading Realms of Gold I can honestly say I will look for other books and authors who do such an important service to literature by using research and story-telling to define the times that produce such amazing writers.