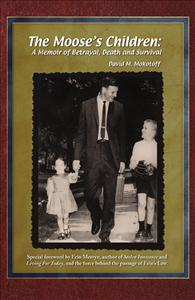 Today we're featuring an interview with David Mokotoff, author of The Moose's Children: A Memoir of Betrayal, Death and Survival. Our author interview series provides an opportunity for our readers to get to know our authors on a deeper level and also learn more about the types of books we're publishing.

All they ever wanted was confirmation of the crimes. Sexually abused and raped at a young age, these five sisters, and one brother, never told their story until after one of them died from alcohol addiction.

Years later, a now grown incest survivor sister filed a complaint with the St. Petersburg Police Department, and the case was ultimately rejected by the Florida State’s Attorney Office, violating and invalidating them again.

Memoirs of sexual abuse and incest are not new, and unfortunately not uncommon. However, what is unique about The Moose’s Children is how it is told from the victim’s husband and daughter’s points of view. Included are sensitive, and at the same time, haunting family photos, and interviews with six surviving sisters.

Here’s your chance to market your book.  Describe it.  And why readers should pick it up?

It describes a period in my life with my second wife, a survivor of childhood rape and incest, and is written from the victim's family and their point of view. After years of alcohol abuse, my wife died of the consequences of alcoholism and liver failure. This book is unique in that it written from the family, and not the survivor's perspective. At least five siblings were affected, including a boy. He died of a drug overdose three days prior to my wife. Since publication, another brother has died of alcoholism, and another sister, who was subjected to sexual abuse, attempted suicide. Surviving sister interviews make this work powerful and relevant. As a physician, I believe this heretofore taboo subject has been given new light by the attention of the Penn State University cases. There is a special forward by Erin Merryn, author, childhood sexual abuse survivor, and the force behind the state of Illinois "Erin's Law."

Following the death of my wife from alcoholism, I began to explore the roots of her disease more deeply. It was only then that I discovered she had been the victim of childhood rape and abuse. Their alcoholic stepfather had similarly abused several siblings. From interviews with the abuse survivors, I felt compelled to relate their stories to make them less invisible, and to bring a form of justice to the unpunished perpetrator.

Sexual abuse is much more common than previously recognized. With the well-publicized Penn State abuse case, more individuals are coming forward out of the abuse shadows and recalling repressed memories. Many readers have told me that they had never before told anyone about their abuse until they read my book. Although there is no shortage of abuse survivor memoirs, this one is written form the very unique perspective of the abuse victim’s family and how it impacted them as well.

I learned that writing a memoir takes much more courage and personal honesty then I have ever imagined. I also learned that publishing a high quality product is incredibly more involved and expensive then I had predicted; it can not be done alone and very much requires a team effort.  Finally, I learned that when writing a memoir, people who at first are willing to cooperate by giving interviews, are later shocked about what was written.

List three adjectives that describe your book as a whole:

I am drawn to memoirs and tales of people who challenge themselves against nature.

I grew up in a small town 70 miles northwest of New York City. This provided me with a low key rural environment, but also allowed me to easily experience all of the wondrous advantages of New York.

I am strong proponent of self-publishing. The traditional publishing market is tilted towards anyone with a platform. If I have a platform already, from which I can market my book, then why do I need them?

They were very approachable and easy to contact. For my needs, the price was fair and the finished product was professionally done.

For more information about David Mokotoff and The Moose's Children, visit: