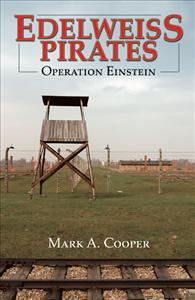 Today we're featuring an interview with Mark A. Cooper, author of Edelweiss Pirates: Operation Einstein. Our author interview series provides an opportunity for our readers to get to know our authors on a deeper level and also learn more about the types of books we're publishing.

Mark was born in London UK, he moved to Florida in 2003. He had a moderate success writing

non-fiction books, in 2008 his first novel Fledging Jason Steed was published. It became an international hit among young readers. Fictionreviwer.com named it Young Adult Book of the year 2009 and it was finalist in the 2009 'Indie book Awards'. In 2010 Prince William announced it as his favorite book.

A group of fun loving rebellious German teens calling themselves the Edelweiss Pirates, witnesses something so dreadful they decide to take action when a six-year old Jewish girl is left orphaned. Torn between patriotism for the country they love and there own rights and freedoms they have to try and do the unthinkable, but with the Gestapo and Hitler Youth hot on their trail; is it too late?

Grandpa Gunthire, a lovable old rogue who adopts his grandson and becomes a champion of the Edelweiss Pirates. He makes money poaching and dealing on the black market.

People I come across, I use parts of their character and blend them to make mine.

What is your work in progress? Tell us about it.

Jason Steed 3. Jason has turned 12, he does not want to get involved with spy’s, police, or any undercover work again. But when a family friend disappears, a suspected child slavery business is blamed. Jason puts himself in harms way to find out who is behind it and rescue his friend.

I have done both now. Jason Steed was first self-published I had great success; an agent and traditional publisher took me under their wing. The publishers took control of my book, cutting it back by 23,000 words. The promotion was non existent, I won’t go that route again, I prefer to be in control and will now only go with a POD company. Infinity is a company who I have so far had 4 books with, I am very happy with them.

If you were told your stories were unbelievable and no written very well, would you continue to write? What would your response be?

I would laugh; the Beatles where told the same by a record company executive, look what happened to them.

I have used them before; I owe the success of Fledgling Jason Steed to them. They published it first before it was picked up by an agent and traditional publisher.

Do you like to travel? If so where is your favorite city?

Does your family support you in your writing career? How?

My wife and son support me with everything I do.

To carry on with the success I have had, and of course I still dream about a movie deal.

For more information about Mark A. Cooper and Edelweiss Pirates, visit: