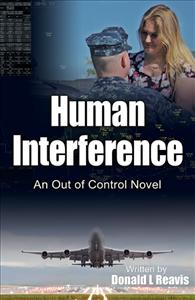 Welcome to our Author Interview series. (Check out the book trailer below.)

Today we're featuring an interview with Donald L. Reavis, author of Human Interference: An Out of Control Novel. Our author interview series provides an opportunity for our readers to get to know our authors on a deeper level and also learn more about the types of books we're publishing.

Donald Reavis, a private pilot, and a resident of Roann, Indiana spent over 24 years controlling airplanes at Los Angeles and Miami air traffic control centers.  Born and raised in rural Indiana, he moved his young family to Palmdale, California in 1997 at the request of the FAA.  The next two decades brought many of experiences leading to writing of his first novel.  Retiring December 2011 he returned to Indiana with his wife of thirty years.  As the layers of stress are now being peeled back he has acquired the desire to share his love of aviation with his readers.

The new air traffic control system is implemented throughout the United States reducing fifteen thousand air traffic controllers to mere monitors.  While technology was at work replacing the radar controllers, deep inside the system things were not adding up.  Just like a sleeper cell awakens to rain destruction and chaos amongst the citizens, the virus planted within the program of the Next Generation Air Traffic Control System awakens to create destruction and chaos in the skies across America.  Charlie Beckler tries desperately to balance his family life, while the aviation community looks to him for guidance in the ever-changing world of technology.

Here’s your chance to market your book.  Describe it.  And why readers should pick it up?

This novel is an easy read and does not go to deep into the technical aspects of the system.  It has been read by many non aviation related people who have expressed the desire to read my next novel.

The idea for this book came about by a comment a controller from Denver Center made back in 2006. I was in training for the URET (User Request Evaluation Tool) when the controller, who was doing the training, told me that the program seemed to take on a mind of its own. That comment triggered a lot of imagination and the next year, while on a month long vacation, I started writing. It took four years of spasmodic writing. Now after two years of editing we finally are reading for the world to read.

It’s hard not to become attached to each one of the characters as you continue to build them into different parts of your story.  Because you ask for singular I would have to go with my lead character, Charlie.  His story is characteristic of my life as an air traffic controller and private pilot.

When writing a novel I have found that when creating a character you start to picture that person. At times someone will come to mind that reminds you of that character.  One in particular is the grumpy old pilot in Indiana.  That character is my brother Duane.  He found it quite interesting that I made him out to be old and grumpy.  He is now one of my greatest supporters in promoting the book.

Grammar not being my strength, I learned the difference between wonder and wander, set and sat, and numerous other words.  The unexpected dividend is the confidence I now have in putting words on paper.  One of my editors advised not to be concerned about grammar.  Her advice was to be creative and let the editors take care of the rest.

While writing how many times do you go back and rewrite a plot?

I would hate to say how many times it took.  A lot of details within a plot would change as the story moved forward.  There was times when I found things just did not add up.  When that would happen I would have to go back and read through the plot again and find a way to make it work.  The nice thing about a novel is the freedom to create and make those changes.

After the story was conceived I spent a year tossing it around better known as procrastination.  Once I made the decision to write the novel myself I just grabbed my laptop and started putting words together.  We had the story first.  The characters were developed as we moved deeper into the story.

When your heart is full it needs someplace to go.  I never really wanted to write this book.  The story came to me and I felt I should give it to someone else.  It was Sharla, my wife and best friend, who encouraged me to write it myself.

As I settle into retirement I would like to expand my writings to include some non-fiction.  My son and I are planning on taking six months next year to hike the Pacific Crest Trail and we would like to do a documentary on the hike.  If five years, a novel every 18 months would be close to my goals.

When you’re not writing, how do you spend your time?

Renovating historical homes or backpacking.  My wife and I love the backcountry and did an eleven day, 93 mile hike this last summer.

Traditional publishing brings clout and can get you into brick and mortar bookstores, if you have the time and contacts to get your foot in the door.  For the less patient, self-publishing with a good marketing plan can reach as many potential readers.

As an air traffic controller I have a challenge of needing to be in control.  What I found out with exploring the traditional method of publishing was the relinquishing of that control.  I did briefly entertain the idea and even sent queries to about a dozen agents.  Two of them actually looked at it.  By that time knowing that my book was time sensitive I researched the alternatives and found Infinity.  I read every bit of printed information on the company I could find and became a fan.