But the President Wants Meatloaf! 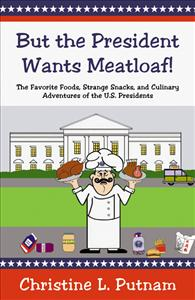 In honor of Presidents Day we're featuring a book excerpt from Christine L. Putnam's book, But the President Wants Meatloaf!

Four U.S. Presidents were alcoholics. One snacked himself to death, another obsessed over leftovers. If what you eat says anything about your personality, imagine what it reveals about the President!

Martha made it for George. Harry preferred Bess’s recipe. It had a place of honor on Ike’s

Sunday dinner table. George W. would rather have a plate of it than any fancy dish the chefs concoct. Meatloaf has been a presidential favorite from George Washington to George W. Bush. When political turmoil escalates, chaos reigns on Capitol Hill, and the phones will not stop ringing in the Oval Office, even the most powerful man in the world wants comfort foods at the end of the day.

The truth is everyone, including the President of the United States, has their favorite foods from gooey macaroni and cheese to decadent chocolate cake. Despite professional chefs and gourmet entrées, every President has preferred the foods he ate at home before he moved into the White House. Some have insisted that the chefs use at least a couple of the First Lady’s recipes. In fact, you will not find many fancy dishes on any of their lists of favorite foods. When the President decides the menu, it usually means meat and potatoes for dinner with cake and ice cream for dessert.

Most of the Presidents were so starved for home-cooking and their favorite foods that they had to bring in their family cooks from home to fix their every day meals; while professional cooks or caterers continued to prepare the elaborate dishes needed for official dinners. President Benjamin Harrison’s White House cook thought he should only eat fancy entrées. She soon found herself replaced with a cook who knew how to make simple, all-American fare.

Several of the pre-Civil War Presidents brought their slave cooks to the White House kitchen. Thomas Jefferson relied on his slave cooks to make his favorite dishes from his home in Virginia like fried chicken, blackeyed peas, and sweet potatoes, while a French chef cooked for guests.

Other Presidents, especially after the Civil War, hired their family cooks to work along side the White House kitchen staff in preparing family meals. The last President to rely on a family cook for his personal meals was Lyndon Johnson. No one made Johnson’s favorite tapioca pudding like his family cook, Zephyr Wright who prepared it almost every day in the White House’s third floor kitchen much to the annoyance of Executive Chef Rene Verdon.

Today, the Executive Chef, Pastry Chef, and kitchen staff prepare all of the food for official functions as well as meals (and snacks) for the President, First Family, and their guests. The staff must learn the favorite foods, culinary tastes, food allergies, and diet specifications of every new President and family member living in the White House...

This book is about the Presidents and their favorite foods because food is a shared experience that transcends politics and division. It also tells us something about their personalities. Everyone feels better indulging in comfort foods especially after a hard day, but our favorite foods reveal something rather interesting about who we really are.

Certain foods connect us as Americans and bring us together. Martha Washington served apple pie so often at formal dinners it became part of our culture. Today, what is the Fourth of July without a slice of apple pie and scoop of ice cream? How ironic is the fact that no matter his politics or political issues during his presidency, every president since George Washington has loved ice cream? It is no surprise, then, to find apple pie and ice cream as one of the most popular desserts in the United States across the generations, as well as a favorite of almost every president.

Food also gives us a personal insight into their personalities and daily life. George Washington’s preference for fish reveals the limited diet of an aging man with ill-fitting, painful dentures. Abraham Lincoln’s love for a glass of milk and an apple for lunch shows his honest simplicity of character, but it also illustrates how little time or concern he had for any personal satisfaction especially meals. Teddy Roosevelt’s over-sized coffee cup reflects his larger-than-life personality. And what could be more perfect than the universally loved sweet confection of jelly beans as the favorite candy of the charming and friendly Ronald Reagan?

Since George Washington sat down at the first presidential table, food news about the Presidents has been a source of fascination for Americans. Today, the President who diets or hates broccoli or chokes on a pretzel reminds us that no matter what political dramas are played out or how we vote, when it comes right down to it, we are all Americans with many of the same food cravings, dieting dramas, and culinary mishaps. It is somehow comforting to know that the most powerful man in the world needs a dish of macaroni and cheese, a cheeseburger, or a stack of chocolate chip cookies every now and then.

No wonder then that most Americans would rather have lunch with the President and First Lady in the White House than take a ride on Air Force One. Over a meal we learn about each other, but across a table we are equals. Who knows, you may have more in common than you might expect. At the very least, we can all agree that there are few things more American than apple pie.

If that old saying, you are what you eat is true, than knowing what the President of the United States likes to eat is more serious business than anyone thought…