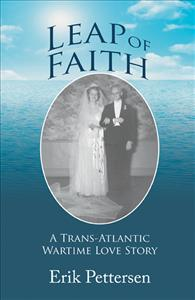 Today we're featuring an interview with Erik Petterson, author of Leap of Faith: A Trans-Atlantic Wartime Love Story. Our author interview series provides an opportunity for our readers to get to know our authors on a deeper level and also learn more about the types of books we're publishing.

Erik Pettersen is a first generation American, the second of six children born to Ingrid and Arne Pettersen, the principal characters in this story. A former nuclear submarine officer, chemical industry executive and management consultant, he is also the author of two other books in decidedly different genres: Semper Fi: The Psalms of Robert Alexander and Limericks for Polite Company.  Erik and his wife Linda live in Annapolis, Maryland. They have two married children and four grandchildren.

On April 9, 1940, the very day that the Nazis invaded Norway, a young Swedish nurse received a life-changing letter. It contained an improbable wedding proposal from the man she loved – a Norwegian living more than three thousand miles away across the Atlantic in the United States. Leap of Faith is their enduring love story, describing Ingrid Sillén’s daring war-time crossing and the life she found in what became her adopted country.

Here’s your chance to market your book. Describe it. And why readers should pick it up?

This is an exciting, true life, true love adventure story, set in Scandinavia and America during the Second World War. As Nazis loomed, a young Swedish nurse dreamed of being with her Norwegian beau, now safely in America. And so the narrative leads into her exciting, dangerous and courageous journey to America, followed by their early life together in their new country. It is a story full of faith, love and spirituality, a strong undercurrent throughout the book.

After my mother’s passing in 1995, I had made a personal resolution to tell her remarkable personal story, first and foremost as a legacy to the later generations in our family. I possessed a recording she had made, sharing memories from her childhood and adolescence in rural Sweden, her training as a nurse, and her harrowing voyage to New York through mine-filled waters to marry my father in the early days of World War II. I also had her personal diaries from 1941 and 1942. But the catalyst for my finally initiating the project was a comment from one of my cousins at a reunion of my father’s side of the family in Norway in 2009. His story was no less remarkable, so I was inspired to delve more deeply into the details of their courtship and marriage. Once I got started, my siblings, a number of cousins and other relatives volunteered to help. They filled in numerous details and anecdotes which added texture to the story.

From the time I finished gathering my starting source material, it took approximately eight months before I submitted my CD to Infinity.

Who designed the cover?

I provided the photograph and a rough idea of how it might be presented, but the in-house team at Infinity did the real creative work, including the color selection and the background of sea and sky. The final touch was arching the title over the top of the oval picture, thereby emphasizing the “Leap.”

What are you doing to market the book?  Are you using social media?

I am using a number of different sources to market this book. It's available directly through my website, www.ErikGPettersen.com, and on Amazon in hard cover, paperback or as an e-book. Shortly after the book was released I went on a four-day book tour in Norway and Sweden, with the itinerary greatly facilitated by relatives there. This included a presentation at the Swedish American Center in Karlstad, Sweden, where copies of the book were left on consignment with the director. The book and my visit were prominently featured in a two-page spread in Sweden & America magazine, published jointly by the Center (in Swedish) and by the Swedish Council of America (in English). I was also interviewed by a columnist for the Annapolis Capital, my hometown newspaper, resulting in a very complimentary article. The book’s release was announced on my Facebook page, and this was followed by postings of pictures from my Scandinavian book tour. I have also sent out broadcast e-mails (1) announcing the book’s release; (2) sharing the link to the Annapolis Capital article; and (3) announcing the subsequent availability of the e-book version. Additionally, I have contacted various Scandinavian-American publications, organizations and retailers, albeit without measurable results to date. I am also beginning a tutorial on the use of social media in marketing.

It really happened, as incredible and inspiring a story as it is. It shows the strength of faith and love in overcoming the terrors of war.

What is your writing process? I begin by laying out what I think will be a logical sequence in the story, giving each element a descriptive name, which very often emerges as a chapter title. Next I assemble and organize materials already in my possession, sorting them into folders that fit each element. Once this is done, it is easy for me to see where I have major information gaps. Then the real fun begins – filling those in! My business consulting assignments invariably require getting answers to critical questions for my clients, and I apply that same discipline here, first pondering where to go to get the information. For Leap of Faith, a major starting source was my older relatives. I quickly learned who were the historians in the family and enlisted their ongoing help. The Internet also proved invaluable to get contextual information and to corroborate specific facts about historical figures and events. As I write each chapter, I make notes of new questions that occur to me and any clarifying information that I think might be needed. For Leap of Faith I sent e-mail requests to those relatives whom I thought most likely to have the answers and also did supporting web searches as appropriate.

Where did you grow up? How did your hometown (or other places you have lived) inspire your writing?  I grew up in Crestwood, New York, a suburb of Yonkers, about ten miles north of the New York City line. As the son of immigrant parents, I experienced a large number of foreign visitors to our home while growing up, many from their native countries of Norway and Sweden. Other than my immediate family, virtually all of my relatives live in Scandinavia, and we have enjoyed a number of reciprocal visits over the years. While I had long intended to write the story that became Leap of Faith, it took a nudge from one of my Norwegian cousins to actually get started.

What are your thoughts on self-publishing verses traditional publishing? I have had no direct experience with traditional publishing. While writing my first book in 2002, I was mentored by a prominent local author who introduced me to the emerging self-publishing industry. He had authored a number of books which were released by a major publisher but was currently working on a fictional book which he planned to self-publish. He pointed out the advantages of personal control and speed to market through this new technology, avoiding the need to deal with multiple rejection letters. After reviewing my first draft, he thought I was capable of producing a good narrative without requiring an editor. All of these factors appealed to me.

I first learned about Infinity in 2008, when I was evaluating publishers for my second book, Limericks for Polite Company. During a business trip to the Philadelphia area in May of that year, I made an opportunistic visit to Infinity’s facilities in West Conshohocken and met with Laura Pici. She explained Infinity’s approach, introduced me to some of her colleagues and graciously gave me a tour of the facilities. I received a very positive impression from all of the people I met and made my decision on the spot. I was very pleased with the quality of the finished product, especially the cover design, which captured the light-hearted spirit of the book. As a result, I came back to Infinity for my third book. Once again, I have been very pleased with the appearance and quality of the finished product.

You can learn more about Erik Petterson and Leap of Faith by visiting: