Books Are Everywhere Waiting to Be Written 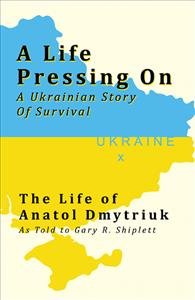 What are you going to write about next? Sometimes authors go in search of a book to write.

Other times, we stumble upon a book just waiting for us to write it. The alert author is always gathering stories. This was my experience with my fifth book that was published in November entitled: A Life Pressing On: A Ukrainian Story of Survival. Who knew an amazing story that needed to be written and published lived just across the street from our house. Over an occasional bowl of Borsch and a shot of vodka, my neighbor and good friend Anatol Dmytriuk would tell me snippets of his amazing and heroic story of survival as a youth during WW2. Who knew this unwritten book was sitting at the table with us just waiting for an author to show up.

I listened to his story of how he was enslaved by the Soviets at age 15 and escaped, walking over 200 miles from Russia back home to the Ukraine. The boy who escaped with him perished during the long ordeal. Then he was enslaved by the Nazis at age 16, as part of their infamous Ostarbeiter program that enslaved millions of civilians from Eastern Europe. Anatol was injured in a coal mine in southern Poland and taken to a medical clinic to have his broken finger set. While waiting for treatment, he slipped down the hallway and jumped out of a second story window to escape. He fled the guards and managed to make his way across Poland and back to Ukraine. But he was never able to return to his hometown or see his widowed mother again. When the war ended, he was in a displaced person’s camp in southern Germany. Later, he came to America.

I knew early on that Anatol’s story was crying out to be written. As a published author, I had stumbled upon my next book.

I met Anatol and his lovely wife Josiane after Anatol took early retirement while living in Wood Dale, a suburb northwest of Chicago. Along with my wife Carol, the four of us became close friends. As our friendship grew, Anatol began sharing with me bits and pieces of his amazing story of survival as a youth and then as a young man. I was impressed with his story and considered how important it would be for future generations of his family. I urged him to let me write his story for them as well as for him. Future generations would come to know the patriarch of their American family and his amazing story of survival through the publication of his story. For nearly fifteen years, Anatol refused my pleas to allow me to write his story. He implored me that he did not want to dredge up all of those painful memories. Long after he retired, Anatol still had an occasional nightmare about his early sufferings at the hands of the Stalinists and the Nazis.

At age 77, Anatol finally and graciously conceded that his story should be preserved regardless of the pain those memories would cause him. One day when I dropped in to visit with him, he put his arm on my shoulder and said, “Now you can write my story. “Why Now?" I asked him. He replied, “Because my grandson is asking about it. Write my story for him.” Fortunately, this came at a time when I was free to interview him and write his story. I had retired early to pursue my writing.

When I began writing the book, I thought I was simply writing a personal, heroic, survival story of a close friend. However, the more I wrote the less I understood why he suffered so much. In order to understand the forces at work that caused his sufferings, I began doing background research. This led me to the discovery that his personal story was part of a much bigger story. It became a story of the genocide of the Ukrainian people. Like most people in the West, I was completely unaware of the terrible sufferings of Ukraine and its people. Ukraine lost a larger percentage of its civilian population during WW2 than any other country, including Germany and Japan.

The tectonic forces of Stalinists in the East and Nazis in the West collided with their epicenter the Republic of Ukraine. Anatol Dmytriuk lived his early years under the diabolical tyranny of those two dark forces. I discovered that his gripping, personal story of survival from his youth, as he thread his way alone through war-torn Europe, was part of this larger, compelling story of terror, enslavement, and genocide in the Republic of Ukraine before and during WW2. So my writing goal enlarged. Now I was writing a personal survival story within a much larger national story of genocide in Ukraine.

There are stories everywhere waiting for authors to discover them and bring them to print. These stories may be as close as your neighbors. Writers need to be ready to sniff out one of these many untold stories and give it life. As an author, you need to be alert and ready to stumble upon a story that is just crying out to be written. That way you will never be struggling with what you will write next.

Dr. Gary R. Shiplett, a retired United Methodist pastor, was a neighbor and close friend with the Dmytriuks. He officiated at the baptism of Anatol’s grandson, at Anatol’s memorial service, and at the dispersion of Anatol’s ashes in the Ford River that flows by the Shiplett home in Michigan’s Great North Woods. Author of four books on religion, a hymn on baptism, worship resources, and journal articles, he holds a Doctor’s Degree in Adult Education and Training from Indiana University and a Master of Divinity from Princeton Theological Seminary. He has taught at both the college and seminary levels.