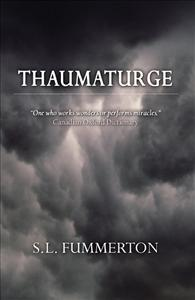 Today we're featuring an interview with Sharon Fummerton, author of Thaumaturge. Our author interview series provides an opportunity for our readers to get to know our authors on a deeper level and also learn more about the types of books we're publishing.

Meet Caritas Thaumaturge, an unlikely supernatural heroine. She's middle-aged, chronically ill, and hanging on by her fingernails, when a shocking event leaves her fantastically changed, for the better. “Thaumaturge” is the story of her transformation and adventures, told in her own words.

Caritas Thaumaturge supplements an inadequate disability allowance by doing research for people too busy to do it themselves. Her days are structured and mostly solitary due to chronic pain and fatigue. The spectre of becoming homeless is always present.

One stormy day as she hurries to deliver research to a new client, she literally runs into a heart-stopping encounter with Nature and has a near death experience. Caritas regains consciousness in the ICU fundamentally changed.

While exploring her extraordinary and evolving abilities, she finds new friends. Together, they take on present-day slavery in a town called Haven Lake.

The idea for the book had wandered around the edges of my imagination for years, but it wasn't until 2004, when I received a used 486er, with Windows 98 and a Mavis Beacon typing programme on its hard drive, that I realized the opportunity I'd been given to try and put the novel on paper.

After looking into other self-publishing companies, I decided to contact Infinity Publishing because it wasn't on anyone's “Beware Of These Self-Publishers” list. Seriously, I had heard some disheartening things about other companies, and because I'm a newbie author, I needed a company that was professional and on the level.

Snugglebutt, because she is based on a really sweet cat named Lady Jane that I fostered for a couple of years for an animal sanctuary named Critteraid, in Summerland, B.C. She passed away a few years ago, but I'll always remember her with love and happiness. She is the “real” character in the novel!

How did you name your characters? I'm glad you asked.

The main characters have names I chose carefully, especially the surnames, because I wanted them to indicate the nature of the character. The best example is the title character and narrator, Caritas Thaumaturge. Both her given name and surname tell you at a glance who she really is. It's the same with the cat's name, Snugglebutt.

The only one that bears any resemblance to anyone is Caritas. I gave her my chronic health issues, and my tastes in books, movies, and music. But, Caritas has far more patience, courage, and resilience than I.

As I mentioned above, I started brainstorming and channeling the characters back in 2004. I submitted the book on a disk to Infinity Publishing in October of 2012. The next months I spent self-editing proof prints patiently submitted to me by my author rep at Infinity Publishing who was so rock steady throughout what was an embarrassing, frustrating, and educating experience for me. She stated the truth: it's better to catch the SPAG errors now rather than after the book is in print.

Who designed the cover?

I couldn't afford an artist to create the image I had, and still have, in mind for the cover. However, when I went through Infinity Publishing's photo collection, I found this one which captured the buildup of ominous, dark clouds with their hidden promise of lightning.

Yes. Writing a novel is hard work. Any kind of writing, if done well, is hard work. There are people who think that anyone can write. Well, maybe they can. But not everyone can write well, let alone create something that will endure time and the changes it brings.

First of all, this was my first attempt at writing a book, a sci-fi/supernatural novel. A book is a whole lot different than writing a term paper, or relating the details of an important community meeting to readers of the local free newspaper, or even writing a pithy letter to the editor. It is not just about throwing words and punctuation on a piece of paper and saying Voila! It is hard work. Let's just say my Canadian Oxford Dictionary has become my writing bible because of the wealth of information it contains. And, I started with the characters because they almost walked up and introduced themselves to me. I believe plot, what happens next, comes out of the characters of the characters – their fears, emotional injuries, needs, drives, flaws, etc.

Do you like to write series? Or single titles only?

Well, I've started a sequel to Thaumaturge. I've got a prologue and eleven chapters on paper and I will endeavour to finish Weapon, even if Thaumaturge bombs royally! It will be good writing practice if nothing else.

Can you describe your main character in 3 words?

She is a woman who, due to chronic illness and the poverty that can come from that, still continues to put one foot in front of the other, and remains observant about what happens around her and the wasteful toll that poverty can take on people, especially the homeless.

Can you describe your hero in one sentence?

Henry is an ex-JTF2 veteran who has seen, and been marked, psychologically as well as physically, by what he has seen, and done, but still puts one foot in front of the other.

Without giving away details, Can you describe one interesting scene in your book in less than two sentences?

While in the hospital after surviving a lightning flashover and having had a NDE, Caritas sees for the first time her Lichtenberg flower.

Perhaps the fact that Caritas Thaumaturge, the principal character and narrator is almost fifty years old and dealing with a decades long chronic health issue is unique for the heroine in a sci-fi/supernatural novel. She is not young and robust, forget wealthy!