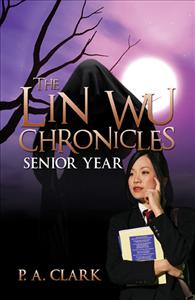 Today we're featuring an interview with P.A. Clark, author of The Lin Wu Chronicles: Senior Year.   Our author interview series provides an opportunity for our readers to get to know our authors on a deeper level and also learn more about the types of books we're publishing. See book trailer below...

P.A. Clark currently resides in Sacramento, CA with his wife and two children. He met his wife

in San Jose, CA while attending college. After meeting his wife, he took it upon himself to learn about her culture as well as other Asian cultures in his area. The Lin Wu Chronicles: Senior Year is his second book about the life and adventures of his character Lin Wu, an Asian American female of Chinese decent.

Synopsis: Lin Wu is a high school senior, just trying to make the grade. But it won’t be easy, especially with all these ghosts, villains and monsters blocking her path, every step of the way. She’ll have to stay on her toes and block out all the horror. But in the world of Lin Wu, not everything is as it seems.  Keeping a high GPA and balancing an overprotective mother will be a cakewalk for her compared to being a regular magnet for the strange and paranormal.  From an urban legend about a psycho lurking in a dirty tunnel, to the dark streets of Chinatown, where rumors of a Vampire fill the air, Lin Wu will have to get to the bottom of every mystery, while still finding time to apply to all the choicest universities.

Why readers should pick up your book?

The Lin Wu Chronicles is filled with mystery, suspense, and intrigue, not to mention plenty of action. But more than that, it’s also filled with subtle cultural cues. While reading the, The Lin Wu Chronicles, readers should be able to get a slight sense of what it can be like to grow up as a second generation Asian-American female, especially one who has an overprotective parent.

Lin Wu is a Chinese-American female and I’ve always liked the name Lin for a female protagonist. The last name, Wu, went well with Lin and I wanted her name to have the ring you feel when you say Bond, James Bond.  However, I had some misgivings about using the name Lin at first, mainly because Lin is considered a Chinese surname. I considered using the spelling of Lynn for awhile, but it didn’t feel right to me. It didn’t have the same pop that Lin Wu had.   After several days of consideration, I finally decided it would be okay to go with the name Lin for her first name since she is a Chinese-American character, not a Chinese national. She could have the name Lin because of her dual cultural identity.  She’s not bound by one set of rules.

Are your characters’ experiences taken from someone you know, or events in your own life?

The short term answer to that question is both. However, many of the experiences I inserted into the stories are based off of accounts I witnessed from others. When I say accounts, I don’t mean the paranormal ones. The cultural accounts of growing up Asian American are mostly from things I’ve heard about just in my own family or have read about in various books. I’ve also spent some time listening to Asian American young people on youtube describing how life can be for them. However, where I grew up, I felt like I was in the ethnic minority even though I was in the statistical majority. I think that may have helped me understand some of their perceptions, even though I didn’t share their background.

An academically motivated individual who frequently ends up in the wrong place at the wrong time.

Without giving away details, tell us about one interesting scene in your book.

Lin Wu finds herself in a dimly lit room surrounded by a coven of cult members whose intentions are unknown to her. Gravely outnumbered and obviously trapped, she must stay calm, cool and collected while relying on her wits to escape.

Tell readers something unique about your book?

The Lin Wu Chronicles was originally conceived as an audio book project for websites that specialized in 1-Hour Audio Book downloads. The initial concept was to write stories surrounding a single main character in an episodic format, kind of like a weekly TV series or reoccurring show.

Where do you find your ideas? Does something trigger them? Do you carry around a notebook in case inspiration strikes?

My ideas for Lin Wu stories come from a unique inspiration. They stem mostly from three distinct influences. The first is a genre known as J-Horror, or Japanese Horror. Basically it entail the unique styles of storytelling I’ve observed in some of the more popular Japanese and Korean thrillers  that became popular during the early to mid 2000s.  The second would be from the research and cultural knowledge I’ve learned through Hong Kong cinema. Including, but not limited to, martial arts films.  The third comes from my love of the spooky aspects found in Scooby Doo. Lin Wu is geared more towards teens, young adults and lovers of the thriller/mystery genre though.

I’ve always written fiction to some degree, but I’ve never attempted to publish a book before Lin Wu. It’s always been one of my life long goals and dreams though. After my son was born and old enough to attend school, I finally had a little more time on my hands. I decided to buckle down and give the writing process a shot. One factor that stood out to me most was the way young people are constantly bombarded with the idea of being famous. In fact, it was regularly displayed on many of the television sitcoms for tweens and teens at the time. While there was nothing wrong with that for entertainment purposes, I found it to be an unbalanced approach. It didn’t seem to give young people a realistic model to emulate. I thought about the type of character I would create and what her goals and dreams would be. Since I also had a chance to see what my wife’s perspective was about life, I decided to create an Asian American character that would have more serious goals.

Would you ever consider converting one of you stories/published books into a screenplay? And if you could corroborate with someone, who would it be?

Yes I think my books would make good screenplays.  They’re filled with the types of stories and conflicts that many filmmakers use when bringing their films to life. If I could corroborate with a filmmaker I would most likely choose one who already had a background in the type of storytelling that influenced me. Takashi Shimizu, the director of The Grudge, comes to mind. I also really enjoyed the South Korean ghost school film Voice, directed by Equan Choi. In fact, that film inspired me to add another chronicle to my book before publication. Hall of Echoes came to me after watching the film Voice, which is a mystery ghost story involving Korean school girls.

Which do you prefer to write – full length novels or short stories?

My stories to date are short stories. However, I’d like to expand into writing a novel. I do feel there is a difference when writing a story to be heard versus a story that is read silently. Lin Wu was conceived as an audio book project, but the stories still work well when read silently. I’ve played around with the idea of writing a longer story about one of her adventures. In fact, I’ve started one already.

I grew up in San Jose California and had a fairly normal childhood. It wasn’t until I went off to college that I learned more about the Asian communities around me. The college I attended had lots of Vietnamese students who I had a chance to interact with. I also worked as a daycare worker in Milpitas California at a private school, where many of the students were children of Chinese immigrants. I became more aware of their culture and values and could see how important education was to them.  Then there was my wife, who I also met around that time. She happened to be Vietnamese.  I made a point after meeting her to learn more about her background which expanded into other Asian cultures. All those experiences along with what I’ve learned on my own helped to shape my writing. My stories are an accumulation of all those experiences to some degree.

When you go into a bookstore, where do you go first?

I usually go to the Science Fiction section in a bookstore first followed by the audio book wall. Since my interest in writing started with audio books, I like to check out the new releases to get an idea of what’s hot. I also like to take note of the packaging, particularly the images used on the covers. I like to see what styles and elements catch my eye and what styles leave me wanting. Everyone has their own taste when it comes to genres of course, but I’m usually drawn to cover art with eye catching colors. It seems to pull me in and makes me want to take a closer look. I also take notice of the title fonts believe it or not. If the font has something that pulls me, in I often take a second look at the book.

To learn more about P.A. Clark: