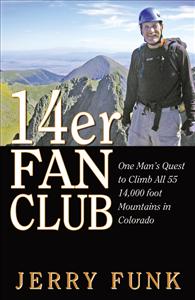 The 14er Fan Club by Jerry Funk recounts the humorous but often life-threatening experiences of one hiker as he climbs the fifty-five (not fifty-four!) Colorado mountains of 14,000 feet and above.

It’s a killer mountain. A few years back a father and son were climbing together. The father, my age, took a wrong turn and fell five hundred feet to his death. Stories like that don’t escape your attention. Little Bear has the “Hour Glass.” All rocks, big and small, falling from the summit downward must pass through the hourglass, which was part of our route. When it rains, as it has been every night, the hourglass also has a small stream flowing down through the middle. Instead of crossing this stream, you must “swim” upstream...almost straight up...on slick, smooth rock with very few or no foot and hand holds. Do you hear the music Tom Cruise? Your mission, should you choose to accept it, is to get up and down alive...Mission Impossible?

… Adam said they would rather hang out for an hour on the summit. We figured it would take John and me that long to get through the hourglass… John was safe. I had ten minutes remaining on Adam’s hour. I started down thinking there was no time to waste. I wrapped the green rope around my arm, at the same time clinging to the red. I was making pretty good

time. Just slide, baby...Go! Go! Go! About halfway down I heard someone yell. I thought John was yelling at me from below.

No answer. I couldn’t see him. I heard something and looked up. Here they came...”Oh mercy, Lord...help me please”…about ten to fifteen rocks were headed down the hourglass bouncing, circling all around, coming from way above, and I was right dead-center in the middle of their path with a stream of water rushing underneath me. With the green rope wrapped around my arm I flattened myself, dangling against the slick rock, hanging on for dear life and trying to become one with the rock. My face and body were soaking in the cold mountain water. One rock bounced off my helmet and another glanced off my right shoulder. They continued bounding past me through the hourglass at breakneck speed. Dangling and still clinging to the red and green ropes I realized I was alive…I was still here!

If you ever want an immediate lesson on how to quickly get down a mountain with a rope, have someone bounce a few rocks off your head. Bingo: my feet pushed away from the wall and I was like an army storm trooper rappelling down a wall. I didn’t know if I was bleeding or hurt, because at that point, who cared.

Having moved to Colorado via Minnesota and Texas, author Jerry Funk formerly considered mountains only as something to be skied. Hiking, climbing, and camping were foreign concepts to him, along with the word 14er. At age 48, he climbed his first 14er and soon had mountain-blood flowing through his veins. As his 14er Fan Club cheered him on, Jerry found new hiking buddies and climbing skills to help him conquer these dangerous but magnificent creations. With humor and wit, Jerry grew from novice to expert climber in this thrilling adventure story.

To order a copy of 14er Fan Club go to buybooksontheweb.com.