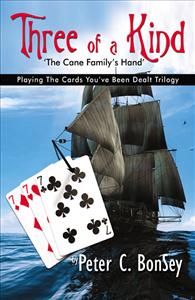 Today we're featuring an interview with Peter C. BonSey, author of the Playing The Cards You've Been Dealt Trilogy (Three of a Kind, Royal Flush and Now! Who's the Joker?). Our author interview series provides an opportunity for our readers to get to know our authors on a deeper level and also learn more about the types of books we're publishing.

Peter C. BonSey, born in Devizes, a country village in Wiltshire, England. At age eight his exposure to the sea and nautical life made an indelible mark on his life. By age fourteen he had experienced England’s Royal Navy by attending many exercises and courses on shore bases as well as at sea. He went on to spend five years in The Merchant Navy before emigrating to Australia, where he lived for 10 years. Peter resides in Buffalo NY since 1977 where his thirst for new experiences has kept him busy and successful. He has appeared on radio, on air, writing and producing. He developed a national fan base while on television in a syndicated show as a designer and establish national recognition, even if only for 15 minutes.

Three Of A Kind

The mid 1800’s life of a rural English family who’s preoccupation with the business of eeking out a living and providing for their families dominates their every waking moment.  To these people sex is a basic function of life that primary focus is reproduction. Shocking twists of fate keep them focused on surviving as they rise above their expected fate.

Acts of Henry III set a wealthy English West coast family on a path of privilege and opulence. Their disdain for the lower classes and attitudes re handed down from one generation to the next. Sex to these people is power, control and a plaything. It becomes their downfall at the hands of one of their own, or so they think.

Takes up the intertwined lives of two families from opposite ends of mid 1800’s English social strata as progressive attitudes and morals insert a wedge through which the protagonist manages to tear down those that he blames for his situation. Can the ironic ending solve this twisted saga’s web of deceit you be the judge?

It was birthed in a complete dream and research showed the need to develop characters that would have reasons to react the way they did. I had to give them parents, then grand parents then great grandparents for their attitudes to be believable. This took us back to the early eighteen hundreds.

Madge Duggan is my female favorite as she shows strength, wisdom and a determination not common to women of the 1800’s. My male favorite is Judd Cane. I drew much of his life from my own experiences.

I choose names that fit their lives. As well as honoring my grandmother’s trait of nicknaming everyone.

The unexpected frequently happens and is not always pleasant. The characters have a tendency to grow on the reader and therefore the reader has distinct reactions to what happens.

The original manuscript took one year. The rewrite, after editing broke it down into a trilogy, which took another two years.

There must be an idea that has some depth first. Secondly research allows one to test one’s story line and concept. I feel that names are important but, in the early days are irrelevant. One should be able to switch names to support the identity of the character’s

Do you like to write series? Or single titles only?

This totally depends on the story. My original manuscript was unwieldly at 700 pages. I think a first time writer should be careful not frighten his readers away.

Without giving away details, Can you describe one interesting scene in your book in less than two sentences?

The sinking of the Titanic means different things to the two families and yet it sets them on a path of destruction.

Historical fact is tightly woven and blurred with the fictional story. Many readers will easily connect with the history.

List three adjectives that describe your book as a whole:

Not who so much as life. It is fascinating how people deal with it differently.

Have you written your entire life? Have you always considered yourself a writer?

I have never considered myself a writer and am more comfortable when others bestow the title. It is only later in life that the interest in writing has appeared.

I enjoy it. I find the English language an incredibly active, exciting thing and wish it would be used more effectively by the masses.

What is your writing process?

Spur of the moment.

If you could visit a place for research, where would it be?

The sea or an airport.

Would you ever consider converting one of you stories/published books into a screenplay? And if you could corroborate with someone, who would it be?

I feel my trilogy has the makings of a mini series or large movie. It’s diversity would require a connection with the story. It was not written for money, but is making it. I think it should be filmed with a desire to bring the story to an even greater life with exciting visuals.

Who or what inspired you to become a writer?

Close friends. Many tell me to write my life story but I feel that is only interesting to me. This story held something else that captured me.

While writing how many times do you go back and rewrite a plot?

Many, many times until it flows on paper as it does in my mind.

My early youth spent in the south of England gave me a strong interest in the sea and life at sea. Being in an area steeped in history was to good an opportunity to ignore. Having in Australia, England and America has made me aware of the colourful spectrum of cultural diversity.

Do you like to travel? If so where is your favorite city?

I have travel the world extensively for over 50 years and am still excited about meeting new people. My favorite city is probably the next new one I go to.

What is your favorite food? Do you have a favorite restaurant you’d recommend if we ever visit your city?

As most English, I am a basic meat and two vegetable type of person.

Have you ever sat and just watched the people go by?

All the bloody time.

To order a copy of Three of a Kind or Royal Flush go to www.buybooksontheweb.com. Stay tuned for Now! Who's the Joker?