An Angel in Brooklyn Heights 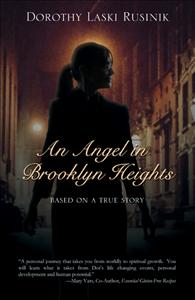 “I’m going to leave,” I stated. He just lay there, unmoving, eyes glassy. I started to dress and

get my belongings together. The clock on the table near his bed read 12:01 am. Brooklyn Heights is a part of New York City so I thought that I would step out his door and hail a cab. New York City was teeming with taxis twenty-four hours a day so I had no hesitation as to abandoning this unsettling scene. I certainly didn’t need this craziness that he was exhibiting.

I picked up my purse and small suitcase, opened his door, and left Jim lying on the bed in a stupor. I walked down the stairs and opened the front door which closed behind me. Once on the porch I realized what I had done. “You dope,” I said to myself. There wasn’t a cab, let alone, a car to be seen on the street. This was Brooklyn Heights! Although it’s part of New York City, it’s the suburbs, it‘s residential. What was I thinking!

I knew exactly what I was thinking, that I could hail a cab. Again I whispered in my mind, “You dope!” I looked around. It was so quiet you could hear nothing. Also, it was very dark, so dark that it engulfed me like the brackish water I swam in as a kid which refused to let me see my feet. Down the street, I could see a streetlight, but around Jim’s residence there was none. There was one thing I could and should do. I turned around and rang the bell. I waited. I waited for what seemed a long time. He did not open the door.

“Well, now you’ve done it. I’m stuck.” I started down the stairs and decided to turn left because if I remembered correctly, that was the direction we went for the street fair. I figured if I could get to Atlantic Avenue which is a main boulevard, then I could either grab a taxi there or at least find a phone booth to call one. Not sure if I was really correct about my direction because we had been doing a lot of talking and had been distracted made me terrified. Not to mention that the street was very eerie except for that one light down the road and I estimated the distance to Atlantic Avenue to be about five blocks.

I began my walk. It was very quiet, so quiet that a pin would be heard dropping if one fell on the sidewalk now. I looked around. The shadows of the shrubbery looked bulbous and hunched as if they were evil demons waiting on the sidelines to pounce menacingly on me as I approached. A small gust of air made these heaps of leaves sway and move which added to my fright and sent shivers down my spine, a ghoulish vision.

Hesitatingly, I inched onward. My feet made a small sound, somewhere between a shuffle and a plop. A shlopp. If I wasn’t so scared, I’d laugh. The two bags I was toting, bumped against my hips and legs. Trudging along, I thought of being in a desert on an August day, totally alone and at the mercy of the elements; but instead of searching for water, I was in need of safety.
“Oh, God,” I murmured, “please help me. Jesus help me.” I may have prayed a little more, but I can’t remember the exact words. I do know that I did invoke the Lord to come to my aid. I really needed assistance and only He could help and protect me. I had gotten myself into this mess and now I had to surrender to Him because my life was in His hands.

No sooner had I said my prayer when I saw a car in the distance coming to a stop from a side street. It was a full block away, but I also noticed it had a lit sign on its roof which meant TAXI! My breath caught in my throat. “Oh, no,” I thought as I started to run toward the cab, he can’t see me and by the time I get there, he’ll have pulled away. I continued to run but the added weight of the suitcase and purse did not allow me to run fast, in fact, it was more like an energetic walk. “I need to cross the street,” I thought.

Going on her first cruise with two friends, Dotty meets a string of characters which eventually leads her to the final event. With the introduction of Eileen who resides in lower Manhattan, she gets a weekend invitation to visit and a ticket to the renown Studio 54. While at the discothèque, she becomes acquainted and starts a new relationship with Jim. After dating, they meet in New York City and she decides to spend the night with him in Brooklyn Heights. At his apartment, Jim’s behavior becomes unsettling and Dotty decides to leave around midnight naively thinking she could go outside and hail a cab.

After the door slams, she realizes the mistake she made because she is now stranded in a residential area with neither a car nor taxi on the street. Saying a prayer, she begins the walk along the dimly lit street hoping to find a phone booth or cab. Miraculously, in the distance, she spies a taxi on a cross street. The cabbie to her surprise does not drive away and she eventually makes it to the car. As she greets him, he turns to her and says something that has remained with her for over thirty years. This has convinced Dotty that an angel was sent to her rescue.

Born in Bridgeport, CT, Dorothy Laski Rusinik now resides in Trinity, FL with her husband, Michael, and rescued pet dog, Fred. She is proud to have a son in the U.S. Navy. Having a B.A. in Elementary Education with a Minor in English, and an M.S. in Reading from the University of Bridgeport, she taught in the Bridgeport school system for 35 years until she retired in 2007. She is active in the teachers’ sorority of Alpha Delta Kappa and the Trinity Oaks Women’s Association. Although other articles have been published, An Angel in Brooklyn Heights is her first book.

To order a copy of An Angel in Brooklyn Heights go to buybooksontheweb.com