Anatomy of a Figure Skating Injury 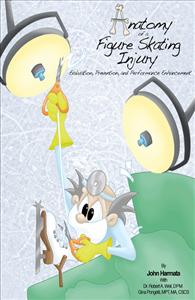 1 Why So Many Injuries

Injuries are common in every sport and figure skating is no different. In the following chapters we will address these injuries in further detail but for now, let us agree that the equipment used in figure skating, i.e., skates, is the single most important item essential to every skater’s success. So why is it that there is no formal schooling or standardized certification program for skate technicians……….

2 The Importance of Proper Boot Fitting

In order to avoid injury to the feet, ankles, knees, hips, and spine, the importance of a properly fitted boot shouldn’t be underestimated. A properly fitted boot not only adds more comfort around the foot and ankle, but overall gives a skater better control while skating.
When breaking in new boots skaters should not have to endure as much pain and suffering as they sometimes do. There are ways to prepare the boots prior to wearing them that will lessen the pain during break-in. Most importantly however……….
3 Purchasing Ice Skates
When buying new or used skates for a young child, it is helpful to establish a time line for when the child last changed shoe sizes.
It is sometimes necessary to make adjustments to boots because of bunions, corns, flat or high arches, or other small bones that may present themselves. This can easily be done using………

A common mistake made when fitting boots is to order a boot longer in length to accommodate a wider foot. This practice has gone on for decades and plays a key role in creating bad skating habits and causing injury.
When deciding on which new boots to purchase the individual responsible for fitting them should take all of the following into consideration………
5 Choosing Blades

Skate blades should be long enough so they extend end to end or slightly overhang the edge of the heels……..

True and False: Blades for younger skaters are usually purchased longer than needed so they can be used on the next pair of boots. For beginning freestyle skaters this doesn’t appear to present any problems. The problems start……...

How often does a skater’s blades come loose or even fall off during practice or a competition. Unfortunately, far too many times and always when a skater least expects it. This chapter explains in detail how to………

Advantages of a Good Blade Sharpening
Level Edges:
• Provides an identical feel for the ice no matter which edge the skater is on
• Makes it easier to spin and maneuver on the ice
• Moves in the Field now become much easier
• Easier to land jumps correctly and on the proper edge

“The foot and ankle are the first shock absorbing mechanisms in the body. In figure skating, tremendous forces are generated through the feet, ankles, legs, knees, and spine when jumping. The landing force from a jump can generate 3-5 times a skater’s body weight”, says Dr. Weil.

Minor problems and imbalances in the feet play a major role in skating performance due to the critical effect of foot function in maintaining precision balance while skating. If proper attention is not paid to the correct positioning of the bones in your feet and other factors, eventual irritations can lead to boney growths on the outside of the heel, arch, and on the inside of the ankle. In addition……….

When achieving enough functional correction, the foot is now aligned to give more propulsion, making skating in general more mechanically efficient. In older adult skaters who may have developed arthritis, orthotics can be particularly effective in relieving foot fatigue and discomfort.

9 Common Injuries – Cause and Prevention

Figure skaters can experience many different injuries throughout their skating career. This chapter takes a look at the various types of injuries they are susceptible too, their likely cause, and how to lessen the risk of occurrence.

Overuse injuries happen when a skater consistently works hard, is aggressive and persistent in training, and use the same areas of their body, joints, and muscles over and over. The fact that most skaters have young growing bodies only adds to the problem. Overuse injuries can be placed into four categories……….

Masking itself as shin splints is a condition known as Anterior Compartment Syndrome which sometimes occurs as an acute injury from a direct blow to the lower leg. Hi-level skaters using too stiff a boot will often inadvertently land their jumps in such a way……..

Although everyone’s feet do sweat, the amount secreted by the sweat glands varies for each individual. There are several things one can do to help reduce or eliminate altogether the odor from boots and feet; beginning with………

There may be more than one source to a problem. In resolving it, a series of steps must be followed. In following these steps to resolve it you sometimes find that other problems have been solved as well.

John Harmata was born and raised in Chicago, Illinois and has been involved in figure skating for more than 30 years. Over the years he has served as a consultant to Danco Sports, “Ultima Skates’ original parent corporation”, Harlick Boot Company, Paramount Skates, and others.

Applying his X-ray training to his business practices, John quickly recognized the importance of proper boot fitting, mounting, and sharpening. As a result, John noticed a dramatic decline in common skating injuries to his customers.

In 2002 John began writing his “Ask Mr. Edge” column which is featured in USFS Skating magazine.

To order a copy of Anatomy of a Figure Skating Injury go to buybooksontheweb.com