Beyond My Father's Farm 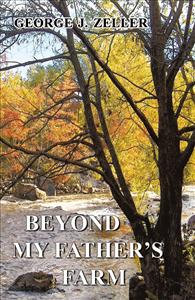 When the family got up shortly after daybreak, they noticed a red sky, indicating a possible approaching storm. Pa was uneasy, worrying that it would rain and spoil the hay before they

could get it into the barn. So he told Walter to get the horses harnessed while he was finishing up the morning chores. Immediately following the chores, we had a quick breakfast that Ma and Mary Ann had prepared.

Walter went to the barn and got the horses and hooked them up to the wagon on the main floor of the barn. He had opened the large back door of the barn as well as the front doors to aid in ventilation and help eliminate the possibility of spontaneous combustion with any damp hay.

Within a couple of minutes the rest of us were right behind him and we climbed up on the wagon with the hay forks and headed for the hay field. Once in the field, it was a simple matter of moving the wagon forward between the rows, where piles of hay were situated about every twenty-five feet. Pa instructed me to sit in the driver’s seat and hold the reins, but not to do anything else, as Pa would lead the horses down the row as needed. I was to hold the reins as a precaution against their running away if they were spooked, perhaps by a snake.

Ma stayed on the wagon and kept the hay load balanced as the others hoisted the hay with the hayforks up on the wagon bed. In a short time the wagon was loaded and Pa, Mary Ann and Walter climbed up on the wagon with me, and Pa drove the team back to the barn, with Ma sitting on top of the hay.

Everything was going fine except that the weather was seriously threatening. Driving the team home was no big deal, as the horses surely knew their way to the barn. As the weather threatened more, with a loud rumble of thunder followed by a bolt of lightning, the pace of the horses increased to a pretty good clip.

The horses seemed to be getting away from Pa as they headed up the driveway toward the barn, and Pa was pulling back on the reins hollering, “Whoa... whoa... whoa... whoa.” He yelled louder with each whoa, but to no avail. The horses charged into the barn, the back door of which was still open for ventilation. Beyond the back door was a twenty-five foot drop into the barnyard. The horses abruptly stopped when they saw the wide-open space below and reared up, striking the air wildly with their front feet.

As soon as Pa regained his composure, he checked the rig and the harness and found that Walter had not hooked the reins from the harness ring to the bridle ring when he changed the horses’ halters to their bridles. Through the whole process of going to the field, loading the wagon and returning to the barn, there had never been a time when the horses had been under complete control; they just knew the routine.

George J. Zeller was raised in upstate New York, where he began a career in finance. He married the girl of his dreams and has two children. He and his wife, Katie, sailed their Columbia 8.7 for many years and continue to pursue their dreams together.

To order a copy of Beyond My Father's Farm go to buybooksontheweb.com