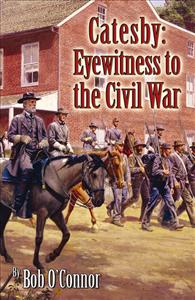 Congratulations Bob O'Connor you're the featured Infinity author of the week!

Bob O’Connor is a nationally recognized Civil War author who has been named Finalist four times in National Book Awards competition. This is his 8th published book.

O’Connor lives in Charles Town, West Virginia, near his two children and six grandchildren. He writes for various local and regional publications and for the national website Examiner.com. He has given presentations in 17 states in the past two years on subjects including Lincoln’s bodyguard, the U.S. Colored Troops, brothers fighting against brothers, and abolitionist John Brown.

Here is a look at some of Bob O'Connor's media coverage:

Check out some of the incredible book reviews he's recieved:

After the first few pages, you will be hooked on this captive story and this believable character. The more you read, the more you will be pulled into the story of the Civil War time period and Catesby's quest to live a full, free life. Each part of his story will have you cheering for him, for his quest for freedom, and for his desire to have a productive, contributing life as a free blacksmith. Each character who interacts with Catesby enriches the story. I was very sad when the story ended. This is Bob O'Connor's third, and in my opinion, the best so far. -Joanne

Catesby's story epitomizes the absoluete barbarity and debasement that the "peculiar institution" of slavery perpetuated on a race and its culture. Further, Bob O'Connor's well-researched description of the horrors of imprisonment at Andersonville Prison Camp in Georgia, 1864, will grip the heart and soul of those readers who are descended from soldiers who suffered and died there. One becomes a part of Catesby's struggle to obtain freedom; we feel the protagonist's joy, pain, and sorrow. The ending was a complete surprise! An absolute read for history lovers. -Linda Murr

O'Connor's vivid description of the Andersonville Prison and Antietam will remain with me for some time. He really lets you experience the pain and suffering there, as well as that of Catesby when he was beaten by his master, creating a limp that he willingly endured for the rest of his life. This historical novel - based on a real person - so impressed me that I included mention of it in the book I am writing about war, which should be published soon. -Robert S. Swiatek

Catesby: Eyewitness to the Civil War is the saga of a real slave who was captured by John Brown during the famous raid at Harpers Ferry in 1859. The book follows Catesby’s life after the raid and his determined quest to become a free black man.

During his journey, Catesby encounters abuse, terrible conflicts, trusted friendships and love, as the war seems to follow him from place to place. A skilled blacksmith and an educated man, Catesby becomes the “inside source” to describe events you could not even imagine. You will find his story unforgettable, but also very believable.

Do you enjoy historical novels? Pick up a copy of Bob O'Connor's Catesby: Eyewitness to the Civil War.