Featured Infinity Author of the Week: Will Hutchison 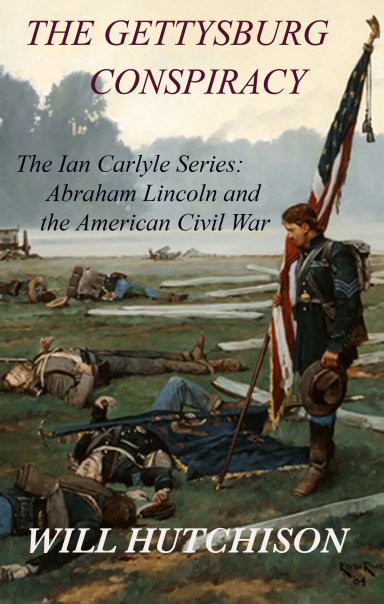 Congratulations Will Hutchison you're the featured Infinity author of the week!

Will Hutchison is the award-winning author of the fictional Ian Carlyle series, Follow Me to Glory (Infinity Publishing, 2007), and The Gettysburg Conspiracy (Infinity Publishing, 2009); as well as the critically acclaimed historical and photographic work, Crimean Memories: Artefacts of the Crimean War (Schiffer Publishing, 2009). He is considered a military history authority, and has collaborated on historical films and major historical events. Will is a sought-after international lecturer on the American Civil War and the Crimean War, and an exhibitor of his own fine art photography.

He spent a significant part of his life in often dangerous endeavors, leading Marines in Vietnam, working as an undercover drug agent in Amsterdam, and serving as a Federal special agent conducting fraud investigations and counter-terrorism initiatives at nuclear plants. Will is a graduate of the FBI National Academy, where he studied under the FBI’s Behavioral Analysis Unit (BAU), Quantico, and got the idea for his serial killer in Satan’s Last Whisper. After graduating from Syracuse University with a degree in Philosophy, he went on to attend Corcoran School of Photography, one of his passions.

He now resides in Gettysburg, Pennsylvania, with his wife, Rosemary, and Sheltie dog, Robbie, taking on occasional law enforcement consulting work. In addition, he is an avid horseman and spends as much time as possible with his Appaloosa, Sunny. Outside his professional and writing interests, he is actively involved with the United States Marine Corps Historical Company, many American Civil War historical organizations, and the Crimean War Research Society. Currently, he is completing work on the next Ian Carlyle novel, Satan’s Last Whisper, an adventure thriller in the Canadian North-West. His fans are eagerly awaiting its release in Summer 2013.

Here is a look at some of Will's media coverage:

“The Gettysburg Conspiracy” received a 2010 Independent Publisher’s (IPPY) Bronze Award in historical fiction. In addition, it is a finalist for the ForeWord Magazine book of the Year Award (BOTYA) for best fiction. “Crimean Memories: Artefacts of the Crimean War” received a 2010 Independent Publisher’s (IPPY) Silver Award for best reference book.

Check out some of the incredible book reviews he's recieved:

“Within the fabric of his meticulous research and tightly-woven prose, Will Hutchison leaves us straddling a muddled line between fiction and plausible truth. Ian Carlyle is back with his most explosive, yet unwitting, adventure yet in ‘The Gettysburg Conspiracy.’ The fate of the Union lies in the hands of this Scottish nobleman who grew as an officer serving valiantly in the Crimean War. They intend to kill President Lincoln, and Carlyle is caught in a crux of deceit at the wane of the American Civil War in this story of love, loyalty, and betrayal. Were it not for the intuition and heroics of Ian Carlyle, this could have indeed been Lincoln’s last address.” - Editor, Gettysburg Times

"The work of some battle weary veterans is never truly done. "The Gettysburg Conspiracy: The Ian Carlyle Series: Abraham Lincoln and the American Civil War" tells the tale of Crimean War veteran Ian Carlyle finds himself in American amidst it bloodiest and most violent American conflict. The Scottish Noble is faced with saving the President and foiling a corrupt plot, "The Gettysburg Conspiracy" is an intriguing piece of historical fiction, very original." - Midwest Book Review

"The Gettysburg Conspiracy is the second in the Ian Carlyle series. Will Hutchinson is known for his very authentic historical fiction books, and this is no different. This very believable account brings Ian Carlyle to America as an observer during the Civil War. Ian, a veteran of the Crimean War in Britain, gets involved in a diabolical plot to harm Abraham Lincoln as the president travels to Gettysburg to dedicate the National Cemetery on November 19, 1863. Carlyle is put in a precarious position taxing his integrity as he balances his brother's plans against what he knows to be right. The book twists and turns until the reader is put in the position of not being able to put the book down until he knows the outcome. Maps and drawings help add to the authenticity of the story. If you like reading about the Civil War, you will really enjoy this book." - Bob O'Connor

In this period thriller, Ian Carlyle, now a seasoned veteran, is brought into the American Civil

War at the Battle of Antietam as a British observer for the Queen. He then finds himself emboiled, against his will, in a plot to assasinate Abraham Lincoln.

His own family name and fortune are at stake as well as the life of the American President and the fate of the United States. In order to protect the family, he must singly wind his way through the murky intrigues of evil, high-placed men, and foil the plot from within.

To do so, however, may cost him the lives of those he holds most dear.

Do you enjoy historical fiction? Pick up a copy of Will Hutchison's The Gettysburg Conspiracy.

Topics: the gettsyburg conspiracy, will hutchison, infinity author of the week