The LightChain Chronicles: Book One: White 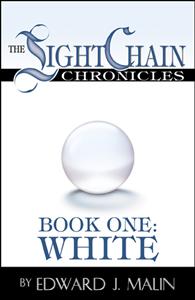 Loren Sojourner drew a deep breath to quiet his thoughts.

With so many distractions lately, he was finding it hard to concentrate upon his knife throws. Most observers would not notice the piddling mistakes he was making, but not his father. Then again, given Fagens pensive state of mind during the past year, even he might be willing to overlook the occasional flaw in his sons delivery.

However, Loren had no desire to test that notion.

Using a deft move gleaned from many longflicks of practice, he confidently flung a knife at a fist-sized target across the room. Immediately, a second blade tossed with his other hand landed inside the painted circle as well. Completing a graceful flip, he landed softly on his feet and watched as second pair of knives struck the target. The grouping thus formed was so taut and neat that a shellbug found itself trapped within the handles.

Startled by the praise, Loren turned swiftly and blushed, although not from embarrassment over his display of accuracy. He was accustomed to applause, performing as he did in his father's show. Rather, his chagrin came from not having detected the other's approach. He knew instantly who would be standing there.

"Rob, your scoundrel!" he said, pleased to see his visitor straddling the entrance.

"Caught you good," Robduc Strongarm laughed before becoming engulfed in his firstkin's crushing embrace. He responded with equal vigor and successfully lifted Loren off his feet and spun him around. So thunderous was the greeting, it seemed likely they would break everything in the room. But before any real harm was done, Rob caught breath enough to speak.

"Ease there, Loren," he said, shoving his friend a stride away with an easy motion. "Do not forget how brittle I am. You would not wish to harm your favorite kin, would you?"

Loren stifled his laughter with a playful slap, then stepped back to consider the truth behind Rob's worry. His firstkin on his mother's side stood considerably shorter than himself, yet the adjacent shadow on the floor was much broader. This two or three stone of added weight was distributed so evenly that one needed a second glance at Robs forearms before fully realizing how solidly he was muscled.

Several times a year, Loren would journey north to help out at his firstkins' farm. He knew the extent of Rob's strength firsthand, having seen him working the fields from sunup to sundown with hardly a break but for a meal at midday. While everyone else rested and stretched their aching muscles, his kin would pause only long enough to drink deeply from a coolskin before resuming the cutting and stacking of the tall, grainy stalks. Working so, he could clear a field twice as quickly as anyone else. It was a noteworthy accomplishment to be sure, considering how dull and repetitive the task was. Even so, Loren struggled to keep up the best he could.

"For town bred, mightily good are thou," Rob's father once told him.

The compliment pleased Loren no end and helped to restore his wounded pride, for he knew Char Strongarm spoke the truth. He was as good as any field hand. But Rob was better. At times this envy of his kin's endless endurance would displease him for a flicker or two. Nonetheless, he knew of no one whose company he enjoyed as much.

"Rob, we have wrestled and fought since old enough to crawl," he replied in answer to his friend's fragility. "Pure grief it is to have you admit defeat. If you are so brittle, then I must be the weakest sapling in the forest.

"That may be true, Loren. But compared to you for giving quit, I am but a soft-bellied Laphound," Rob answered, his deep voice reflecting his predominately Dwarfish legacy. He gave his kin a slap on the arm, hard enough to have sent Loren sailing across the room had he not braced in seeing it coming. "I have to tie you in a knot I do before you will say stay.

Which makes us both a couple stubborn Haulbeasts, I guess," the taller youth replied. "For once we start wrestling, neither you nor I ever wish to concede failure. Truly, I am amazed we have fought this long without seriously hurting each other. But speak you of Hounds, how is Gentle? Is he nearby?"

"Tall as ever stands he and just as ornery, if such can be possible. When I dropped by the Guild to see if you were there, Fagen said I should leave my cur with him. Festival has made Centerton too crowded to feel comfortable walking its paths with a Hound such as mine. Still, your father threatened to sic him after us if we dally too long. You know what Gentle is like when he knows a meal awaits."

He knew all too well how vexing the Hound could be when hungry. He also knew Fagen would want him back at the Guild at least several longflicks before the show was to start, although Loren could not see what difference it would make being a few flickers tardy tonight. Lately, their performances were becoming increasingly difficult to finish, for they lacked the fun and excitement they once held.

To order a copy of The LightChain Chronicles go to buybooksontheweb.com