Is Crowdfunding the Right Move for Authors?

Virginia Woolf had it right: in order to do the best fiction work, one needs a modest sum of money and a room of one's own. The argument about the perfect writing environment can go on for years, but one thing is certain: in order to be able to write, you have to have some way to pay the bills. Most writers have other jobs, at least when beginning their career, but some are discovering an alternate source of income that might provide enough to live on while finishing up a novel or nonfiction book. It's called crowdfunding, and it's the newest way to raise money to allow you to use your creativity without tying up your day making a living. 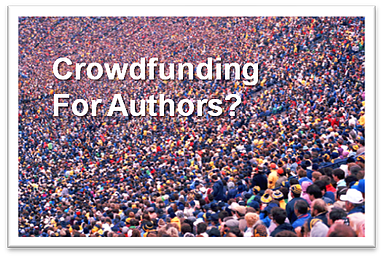 It all began with crowdsourcing, a concept unique to the internet. If enough people do a small amount of tiny jobs, together they can achieve massive results. This was first proven on a popular scale with the SETI@Home project, which uses home computers in screensaver mode to do complicated computations. Companies soon popped up to take advantage of crowdsourcing. Offering pennies a task, they broke down massive data entry jobs and other digital tasks into small bits. Workers did tiny bits of almost brainless work for pocket change, and clients got very large tasks done relatively quickly.

Crowdfunding took this concept and turned it on its head. What if enough people believed in your project, enough so they'd be willing to pitch in five or ten dollars to help? Creative people across the globe are creating crowdfunding campaigns, raising money for creative efforts such as making indie movies, building inventions, and, yes, taking time off to write books.

If you've decided to try your hand at raising money this way, keep in mind that the initial setup takes a lot of time and effort. Choose a crowdfunding spot such as PubSlush, which is specifically for writers, or Kickstarter, probably the best-known of them all. Each site has its own pros and cons, and you'll need to sample several to find your best fit.

Research the site to find the best methods of creating your presentation. You'll need to make a video about your project, come up with a convincing essay, and create viable gifts for larger supporters. Ask for a reasonable amount to get you through your project. You don't want people to think you're taking advantage of them. Be honest and direct, and add a touch of humor if you can. Market your campaign everywhere you can, and ask all your fans to do the same. Keep in touch with your supporters if your campaign is successful, and promptly send out all the promised swag in a timely manner.

We have considered starting our own crowdfunding site for authors and would love to hear your thoughts?