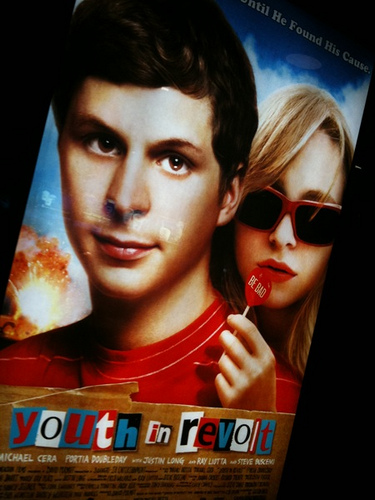 C.D. Payne is a self-publishing success story. His first novel “Youth in Revolt,” debuted as a hilarious movie back in January at # 9. However, like most Hollywood tales, the real story is a winding road to a happy ending. From self-publishing to traditional and back again.

Although a mainstream publication today, “Youth in Revolt” was originally self-published. The film is a combination of Payne’s first three books in the sexy and humorous Nick Twisp journals. Payne began the series in 1989. After being accepted and subsequently rejected by a literary agent, Payne tried sending it out to publishers himself, to no avail. By then he had already written the first three books of the series and decided to take the self-publishing route.

Payne read all the books on self-publishing, most of which were discouraging to fiction writers. His research would find the high cost of printing as well as the difficult task of marketing a self-published book.

But Payne could not be deterred, spending over a year working as both a catalogue copywriter and freelance writer in order to raise the funds to print and promote his book. He learned publishing software, designing the book himself and hiring an artist to design the dust jacket.

Payne’s hard work would pay off in 1992, when the first 3,000 copies of “Youth in Revolt: The Journals of Nick Twisp” arrived, having been printed by a company in Scranton, Pa. Payne immediately began efforts to promote his book, sending it out to reviewers and trying to get distributors to pick it up for sale. Soon enough, Payne began receiving good reviews and a large employee-owned book distributor in Oakland began distributing “Youth in Revolt.” Orders from Baker & Taylor and other wholesalers also began to come in.

After meeting at a book festival in San Francisco, Payne contracted Bob Warden, A Santa Rosa book-marketer, as a publicist to promote his book. Warden then introduced him to literary agent Winifred Golden, who had interest from several publishers. Before he knew it, an offer from Doubleday was on the table and in the spring of 1995 "Youth in Revolt" was published in hardcover. Payne then had to discontinue selling his self-published first editions.

It was only a matter of time before Hollywood came calling. Though book-to-movie deals are rare, even rarer are authors being involved in the script. Payne was pleased to find much of the film’s dialogue stayed true to the book.

“I was always skeptical,” said Payne, when asked about the accuracy of book-to-movie. “I think it was rather a miracle that they could make a movie out of such a long book, with so many characters. It retained a lot of the book, and the movie makes sense all the way through.”

“Youth in Revolt” was released on DVD on June 15 and stars Michael Cera.

Payne decided to return to independent publishing to continue the saga.  This way he can more freely manage future creative rights. Payne’s choice is akin to other serious authors’ attitudes as they leave  traditional publishing behind due to the ever-changing face of the industry. Books five and six “Young and Revolting: The Continental Journals of Nick Twisp” and “Revoltingly Young: The Journals of Nick Twisp’s Younger Brother” were published by- you guessed it- Infinity Publishing.

Brittany Lavin has been an In-House Author Representative at Infinity Publishing for two years. Her job is to guide authors through the process of having their book published and provide them with administrative support. Brittany graduated from Cabrini College in 2009 with a BA in English and Communication. A writer at heart, Brittany dabbles in poetry and prose. She also enjoys reading, spending time with loved ones, and being a “Geek.”