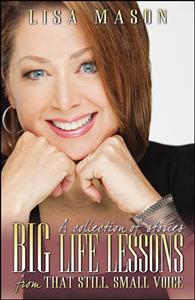 Lisa Mason, an Emmy award-winning host and writer, has published her new book with Infinity Publishing. As a host for the QVC Shopping network, Lisa is seen in nearly 90 million homes across the nation and has interviewed such celebrities as Barbara Walters and Hugh Downs.

Lisa began her career in Oklahoma in 1987. She received her BA from the University of Central Oklahoma before joining FOX as a news anchor. Two years later Lisa joined PBS where she anchored and hosted a weekly talk show. During her five years at PBS, Lisa also wrote and produced several award-winning documentaries- including Faces of Aids for which she received an Emmy.

Lisa was hired by QVC shopping network in 1995.

Lisa’s book, Big Life Lesson from the Still, Small Voice, chronicles the way God speaks to us. Combining present-day observations with stories of the past, her tale takes readers on an honest, sometimes heartbreaking, journey. The book was one of Infinity’s top sellers for February 2011.

“As to the success of the little book, I think a big part of it is social media,” Lisa said in an interview for the Author’s Advocate, Infinity’s monthly newsletter. “I posted my book on Facebook and on my website.  Additionally, all of my friends have ‘tweeted’ about it and posted it on their websites as well.  One can never, never underestimate the power of the new technologically-advanced age in which we live.”

Meet Lisa at her upcoming events in Pennsylvania, North Carolina, and Maryland!